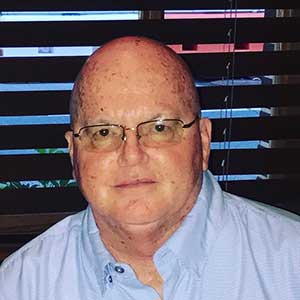 A lifetime coach and educator, Sam Barham has influenced countless youths throughout his career, encouraging them to overcome obstacles, to work at difficult tasks and to never give up on goals.

Those life lessons imparted to others prepared him for his greatest challenge – being diagnosed with leukemia in October of 2016.

“Everyone there was so kind and helpful,” Sam said. “Tulane saved my life. That program – and the power of prayer – are why I’m still here today.”

Sam underwent an allogenic stem cell transplant with donor cells from his sister.  Following the successful transplant process, Sam suffered various complications, all of which are continuing to be treated by the Tulane medical staff.  Over the course of a year, he spent about eight months in the hospital.

He appreciates the professional and personal care provided by hematologist/oncologist Dr. Hana Safah and the entire transplant team who were always available, he said.

Sam has since returned to work on a part-time basis as a middle school athletic director as well as coaching cross country and track. He is thankful to the entire staff at Tulane for such a positive experience during his time there, he said.