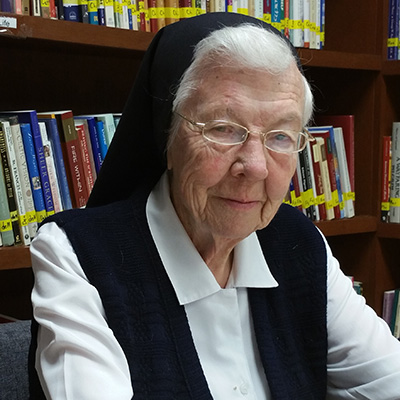 Sister MarieClare Powell was a generally healthy 90-year-old, enjoying her golden years and active lifestyle living in Mississippi. But for about two years, she frequently felt nauseous and had to eat cautiously, being careful of the amount of food she ate. “I ate with a bit of fear, but couldn’t pinpoint which foods triggered the nausea,” Sister MarieClare said.

At one point, she vomited a small amount of blood, and she went to an emergency room where blood was also found in her stool. She saw a gastroenterologist who tried to figure out what was causing these scary issues. After another episode of vomiting blood, her local emergency room sent her to Tulane Medical Center, about 100 miles from her home in Mississippi. She said she was comfortable coming here, though, because she had received good care at Tulane since the 1980s.

Christopher DuCoin, M.D., MPH, FACS, who specializes in minimally invasive and robotic esophageal and foregut surgery at Tulane Medical Center, evaluated Sister MarieClare. He determined that she had a hiatal hernia, caused by the upper part of her stomach pushing through an opening in her diaphragm and bulging into her chest cavity. To repair the hiatal hernia, Dr. DuCoin performed a robotic-assisted laparoscopic hiatal hernia repair with Nissen fundoplication.

The robotic surgery lasted about four hours and required five one-inch incisions. During the surgery, Dr. DuCoin attached the stomach to the abdomen to prevent it from reemerging through the hernia. The incisions were closed with glue, so she didn’t have any stitches or staples. Sister MarieClare spent three days in the hospital after surgery.

“I had a good recovery,” she said. “I started on a soft diet and couldn’t eat meat or fish. After I left the hospital, I stayed for four more days at a home in New Orleans where friends and colleagues could help take care of me as I recovered.”

Sister MarieClare is grateful that Dr. DuCoin was able to diagnose and repair the hernia. “Dr. DuCoin is very knowledgeable and he explained the surgery to me,” she said.

A few months after surgery, Sister MarieClare is back to swimming, biking and walking. “I’ve forgotten that I even had the surgery! My acquaintances are amazed at my recovery. Two weeks after surgery, I went back to volunteering three days a week. I’m able to eat everything, and I no longer have nausea,” she said. She is relieved the miserable symptoms are gone and that she’s back to enjoying all life has to offer.