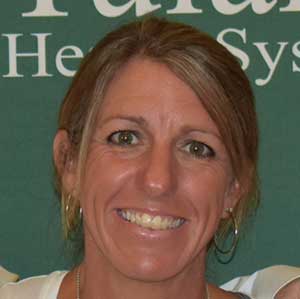 Avid runner and sports enthusiast Ginger Duease hopped out of bed bright and early one Sunday at her home in Gulfport, Mississippi. She had returned from a relaxing vacation with friends the night before and was ready to get back in the gym and resume training for her next Spartan Race, a challenging obstacle course race that requires both physical and mental strength to complete tasks such as running, mud crawling and wall climbing. While a friend slumbered in the guest room, Ginger quietly moved around the house getting ready to leave, when she was struck by a dizzy spell. She laid down waiting for it to pass, when suddenly the entire right side of her body became paralyzed. Ginger was having a stroke.

Ginger recognized her stroke symptoms right away and quickly managed to wake her friend, who immediately drove her to the Garden Park Medical Center emergency department.

“During a stroke, we say that time is brain because up to two million brain cells can die per minute,” said Dr. Wilson. “Ginger had classic stroke symptoms, which is why we initiated our video conferencing with the Tulane stroke specialists right away.”

Together, Dr. Wilson and Dr. Salerian determined the best treatment option was to provide clot-busting medicine immediately, and once stabilized, transfer Ginger to Tulane Medical Center for further care.

“I remember everything that happened in the Garden Park ER,” Ginger said. “The doctors and nurses were talking to me and asking questions, but I couldn’t respond – I couldn’t speak. I even remember seeing Dr. Salerian on a computer screen in the ER like he was on Skype.”

Right after the clot-busting shot was administered, Ginger could begin to feel and move the right side of her body again. It wasn’t long before an ambulance arrived to transport her to the accredited, comprehensive stroke center at Tulane Medical Center in New Orleans where she would undergo a thrombectomy to remove the remainder of the stroke-causing blood clot – and meet Dr. Salerian in person.

Ginger was not Dr. Salerian’s typical stroke patient. Here was a fitness buff in her early 40s having a stroke – and not just any kind of stroke.

“Ginger suffered a potentially devastating left middle cerebral artery stroke, which often results in permanent disability or death,” Dr. Salerian said. “In Ginger’s case, she made it to the ER in less than an hour after her stroke started and received the clot-busting drug tPA with 30 minutes of arriving at the ER.”

Thanks to the quick actions of Ginger, the ER team at Garden Park and the neuroscience team at Tulane Medical Center, Ginger was discharged home with virtually no after effects. She spent a few days at Tulane Medical Center recovering. She regained feeling and movement in her right side and could walk and talk again very quickly. When Dr. Salerian gave Ginger the news that she was being discharged home, one of her first questions was “When can I start working out again?”

Ginger’s stroke was an obstacle she overcame with the help of Garden Park and Tulane Medical Center, and she’s not letting it slow her down. Three months after her stroke, Ginger is back to working out 5-6 times a week and training for her next race.

“It might sound silly, but I’m doing a Spartan Race in February to try and qualify for the TV show American Ninja Warrior,” she said.

Imagine that – a stroke survivor not only conquering a Spartan Race, but perhaps moving on to participate in one of the most elaborate and challenging obstacle courses of all time on American Ninja Warrior.

“Ginger is already a winner and a warrior in our eyes,” Dr. Salerian said.